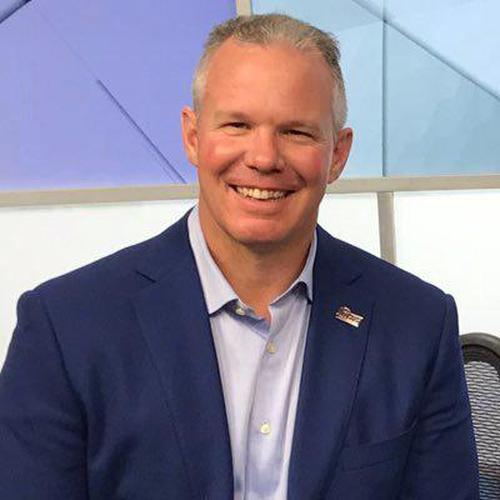 Little Rock native Chris Curry is in his sixth season at the helm of the Trojan baseball program, named head baseball coach at Little Rock on July 1, 2014. Curry has made his mark in Little Rock with an overall record of 121-150, making postseason appearances in four of his first five seasons.

2019 was a banner year for Curry and the program as Little Rock won 29 games, the most for the program since 2010, as the Trojans set a new benchmark for conference wins in a season with 18. Going 18-11, Little Rock earned the number three overall seed in the 2019 Sun Belt tournament, tied for its best seeding in program history.

One of the most memorable moments of the season came on April 2, 2019, when Little Rock earned a convincing 17-7 win over Arkansas, the reigning national runners-up, at Baum-Walker Stadium in the first meeting between the two schools. That spearheaded an impressive 8-0 record against teams from the Natural State as Little Rock became the first program in the state’s history to defeat the other four Division I schools in the same season.

Individual accolades rolled in for the Trojans as Riley Pittman and Chandler Fidel were both named first team All-Sun Belt selections, followed by Pittman being named a CoSIDA Google Cloud Second Team All-American after becoming the program’s all-time home run leader. Little Rock claimed the Sun Belt Conference’s Academic Team achievement for the third-straight year (2017, 2018 and 2019) while extending the program's streak to 10-straight semesters of a team GPA above a 3.0.

Following the season, Curry saw three more Trojans sign contracts with Major League Baseball organizations, bringing the total to eight since he arrived at Gary Hogan Field prior to the 2015 season.

Curry and the Trojans made their third consecutive Sun Belt Conference Tournament appearance in 2018. Little Rock finished the season with a 28 wins, the most since 2013. The Trojans won their fifth straight series against Texas State — a feat that had never been accomplished against another Sun Belt team since Little Rock joined the league in 1992. The Trojans reached an RPI of 31 during March, the highest in program history, with Justin Garcia being selected in the 17th round of the MLB Draft by the Arizona Diamondbacks.

Little Rock had a pair of wins over No. 16 Louisiana, winning the season series for the second straight year against the Ragin’ Cajuns. Under his guidance, the Trojans earned three All-Sun Belt selections while Ryan Scott earned Sun Belt Student-Athlete of the Year and Louisville Slugger First Team All-American.

Before coming to Little Rock, Curry was a top assistant and pitching coach at Northwestern State for two years and previously worked on the baseball staffs at Arkansas, Arkansas Tech, Hendrix and Meridian Community College.

In Curry’s second year at Northwestern State, the Demons won 33 games and tied a school record with a 17-win improvement from the previous season, including a Southland Conference record 14-win increase in league play. NSU also boasted the Southland Conference Freshman of the Year and a Louisville Slugger Freshman All-American in right-handed pitcher Adam Oller. Centerfielder Bret Underwood, who Curry recruited, was taken by the San Francisco Giants in the 20th round of the Major League Baseball First-Year Player Draft. Off the field, the Demons posted a team GPA of 3.0 or higher in each of the four semesters under Curry and head coach Lane Burroughs.

Prior to his stint at Northwestern State, Curry served as head coach of Meridian Community College from 2011-12. He went 69-44 in two seasons at Meridian, capturing a Miss-Lou Conference Championship and earning Coach of the Year honors in 2012. Curry coached two junior college All-Americans and produced the NJCAA national home run leader in both seasons. Two of his players were selected in the 2012 Major League Baseball Player’s Draft while the team raised its cumulative GPA from 2.62 to 3.30 with Curry at the helm.

Curry worked as an assistant coach under head coach Dave Van Horn at Arkansas from 2009-10. He worked with the catchers and assisted with hitting duties in his time with the Razorbacks, which included a College World Series appearance in 2009 and an NCAA Super Regional in 2010.

In 2009, Arkansas led the Southeastern Conference in runners caught stealing after placing last in the league in that category the year before Curry’s arrival. The Razorbacks led the SEC with just three passed balls in 2010.

Curry’s coaching career began as an assistant coach at both Hendrix (2007) and Arkansas Tech (2008), coming following the completion of Curry’s seven-year pro playing career. He made appearances in major league spring training games from 2002-05 and allowed him to catch big leaguers Kerry Wood, Carlos Zambrano, Mark Prior and Tom Gordon.

Curry worked his way up to the Chicago Cubs’ Triple-A affiliate between 1999-02. He finished his pro career as an All-Star with the independent Northern League’s Gary Southshore Railcats in 2006.

Curry played his high school baseball at Conway High School and was an All-State pitcher and catcher for the Wampus Cats. He played two seasons at Meridian CC and was Baseball America’s No. 1-rated junior college prospect in the nation in 1998. He was the starting catcher for Team USA’s Junior College All-Star Team that same year.

Following two All-Miss-Lou Conference and All-Region 23 seasons at Meridian CC, Curry signed with legendary coach Ron Polk at Mississippi State. He led all SEC catchers in fielding percentage in 1999 before being chosen by the Chicago Cubs in the ninth round of the 1999 MLB Draft.

A veteran of seven years as a catcher in professional baseball with the Chicago Cubs and San Francisco Giants organizations, Curry’s selection by Chicago marked his fourth time being drafted. He was selected by the San Francisco Giants in the 26th round as a high school senior in 1996 and twice by the Detroit Tiger, first in the 17th round in 1997 and again in the 52nd round in 1998.

Curry was a 1998 Cape Cod League All-Star and in 2018 was inducted into the Mississippi Junior College Hall of Fame for his playing career while at Meridian.

He is married to the former Chassity Cossey of Hamburg, Arkansas. The couple has one son, Caleb Christopher, and one daughter, Lily Marie.